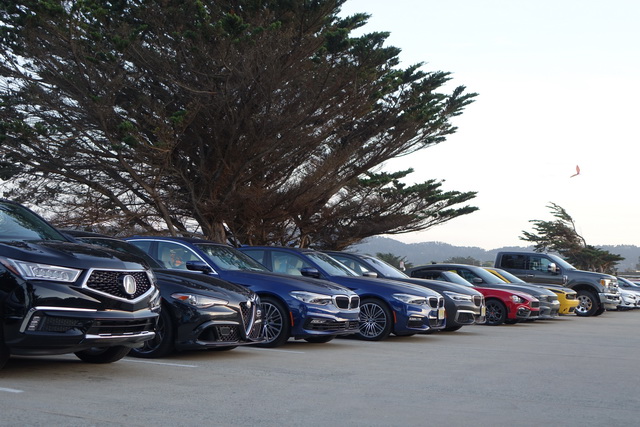 The Auto Channel – Jon Rosner
Filling up with Premium Fuel Electrons, PG&E and the Next Generation of Energy and Vehicles. READ MORE
Why G-Vectoring In The Mazda CX-5 Is So Cool.  READ MORE

Seeking Alpha – Anton Wahlman
Anton Wahlman reviews automobiles and other technology products, as well as analyzes the automotive and technology industries. Anton represented Seeking Alpha at Media Days this year and wrote several stories on the vehicles there.  READ MORE

WAJ Media Day Offers Preview of Upcoming Test Drives
Once a year a group of automotive journalists including Clean Fleet Report gathers on the Monterey Peninsula to drive a selection of the latest models available. This year we had the opportunity to sample a variety of vehicles, with First Drive stories scheduled to appear in the near future. READ MORE

First Drive: 2017 Chrysler Pacifica Hybrid
Buy It Because It’s a Great Minivan; Love It Because It Plugs In
Chrysler invented the minivan back in the Eighties and it’s been a mainstay in the market until recently, when car-based crossovers added a third row of seating, bumped up their styling and fuel economy. The one-box design of the minivan has always been the height of functionality, but that was pretty much all it had to offer. The 2017 Chrysler Pacifica Hybrid is the serious challenge to the new status quo—a strong attempt by Chrysler to retake the high ground with a new approach to the category. READ MORE

Mazda Keeps Upping the Ante in its Most Popular Car
Mazda is a little auto company, but it’s got an oversize presence among those who value driving for pleasure and appreciate engineering that backs up that pleasure. We had a chance to do a brief drive of revamped 2017 Mazda CX-5. READ MORE

TIREKICKER – Mike Hagerty
The 2017 Jaguar XE35t AWD
Normally, the cars you read about here at TireKicker are loaned to us by the press fleets of the various manufacturers for several days. Seven is typical. Occasionally, we’ll get a longer period of time, and sometimes it’ll only be three or four days. Our “30 Minutes With” series are cars that we spent half an hour behind the wheel of during the just-concluded Western Automotive Journalists Media Days in Monterey, California. READ MORE

The 2017 Mercedes-Benz GLA 250 4MATIC
While Mercedes builds some of the best cars in the world, I’ve always been underwhelmed by their least-expensive cars. It costs money to build a car to a standard, and that’s why E-Classes and S-Classes cost what they do. The first ML SUV was built to a price, and it showed. The most egregious example was the GLA 250’s most direct ancestor, the 2001-2005 C230 Coupe. Car and Driver was as kind as it could be at the time, but if you read between the lines, you can see that Frank Markus had to really, really try. READ MORE

The 2017 BMW 540i
The knock on BMW is that it has somehow lost its Ultimate Driving Machine mojo, that it’s become too soft, and that its expansion into pretty much every segment of the automotive marketplace has robbed its core products of their passion. Bull. READ MORE

The 2017 Jaguar F-Type SVR
The 2017 Jaguar F-Type SVR is, without a doubt, the highest-grade machinery I drove all that day. Make that all this year. Possibly all this decade. The first clue came when I made the right turn onto Carmel Valley Road when leaving the Quail en route to Mazda Raceway Laguna Seca. I gave it about one-third throttle and immediately and literally held onto my hat…which I then tucked between the driver’s seat and the console for safekeeping. READ MORE

The 2018 Jaguar F-Pace S
My question about the F-Pace S wasn’t whether a company like Jaguar could build a satisfying SUV…that question’s been answered in spades by Porsche, Audi, Bentley and other luxury/performance manufacturers who’ve done it, and are prospering as a result. READ MORE

The 2017 Toyota Mirai
The Mirai (Japanese for “future”) is a different kind of high-grade machinery from what I’d been driving. It’s a hydrogen fuel cell car. The idea being to take an element of nature and use it to power a vehicle, with water vapor being the only tailpipe emission. True green car enthusiasts will tell you that this is what makes the most sense, as hybrids use some fossil fuels, and electric vehicles require a charge that comes from existing power plants, some of which…burn fossil fuels. READ MORE

The 2017 Infiniti Q60 Red Sport 400
To look at it, you might think this was just a garden-variety Q60 (they start at $38,950 for a model with a 208-horsepower turbo four) with some aggressive looking wheels and black accents in the right places, but no….this is a very special Q60. The Red Sport 400 is the top-of-the-line, with a 400-horsepower twin-turbo 3-liter six.  READ MORE