Ford didn’t decide to make its revolutionary move to an aluminum body in its best-selling F-150 pickups quickly–or without undertaking its most extensive testing program ever. 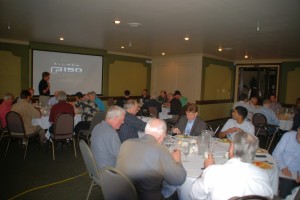 Eric Peterson, the F-150’s marketing manager, detailed Ford’s process with what many in the industry are calling a “game-changing truck” to Western Automotive Journalists members and guests at the June 18, 2014, meeting.

The 2015 F-150 that goes on sale in late 2014 will be up to 700 pounds lighter than its predecessor through the use of aluminum, high-strength steel and other moves such as a smaller, lighter engine, Peterson said. Because Ford knew its truck buyers were not early adopters of new technology, they knew they were taking a risk. 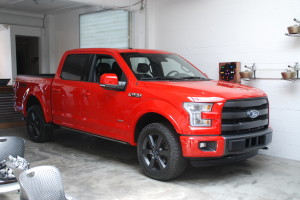 To mitigate that risk, Ford ended up putting two million more test miles on the 2015 model than they had on its previous generation. They also pulled a few new tricks, such as giving six prototypes to three companies without telling them they had aluminum beds. Those three companies–a mining company, an energy company and a construction company–were told to “drive them like you stole them” and “run ‘em like you want to break it.” The companies obliged and ended up feeding more information into the development cycle while fundamentally validating the viability of the new configuration.

In another unconventional test, Ford took one of the new aluminum trucks, disguised as a current model, to Mexico to compete in the Baja off-road race. In that case they were also testing the new downsized 2.7-liter EcoBoost V-6 that be one of the key powerplants for the new F-150.

The testing convinced Ford that it was not risking its 37 years of truck sales leadership by this bold move. It has shaken up the tradition-bound pickup market, which is being challenged because of new fuel economy standards. Ford’s chief rival, General Motors, is pursuing a strategy of introducing a midsize pickup and adding a diesel engine; cross-town rival Chrysler (or Fiat Chrysler Automotive as it is now known) has already added a diesel engine to its Ram pickup. Toyota has hinted about hybridizing its pickup although it also has the compact Tacoma to hedge its fuel economy bets. Nissan, like Chrysler, is adding a diesel engine and, like Toyota, has a smaller pickup in its lineup.

The biggest differentiator in Ford’s strategy was a point Peterson emphasized several times in his presentation and in answer to questions. The move lightweighting move Ford is making positively impacts all of its pickups, where a new engine or even a new model will only affect a portion of the fleet. The strategy is clear and Ford has done its homework with its customers; we’ll now wait to see if the market responds positively to the new truck when it hits the showrooms this fall.