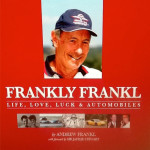 Andrew will be talking about his new book titled Frankly Frankl, a memoir that reads like a work of fantasy but is all true. Communists, Formula One, the Cannonball Run, the Olympics and even a rare love lost and found again 40 years later. The book’s title says it all Frankly Frankl, with a foreword by three time Formula One Champion, Sir Jackie Stewart. Andrew will be doing a book signing following the presentation.

Andrew, who is a longtime WAJ member, has been covering Formula One for over 50 years and, as European Bureau Chief of the Autochannel, has also had the chance to drive just about every new car since 1996.