Recap of our March Member Meeting At Unity
By Emme Hall, WAJ VP of Events

Our March meeting found us in the Unity offices in downtown San Francisco. Unity

produces a real-time 3D development platforms and is mostly known in the video game world. However, the tech is also used by manufacturers like Volkswagen, Toyota, BMW and even niche producers and designers like Pininfarina. 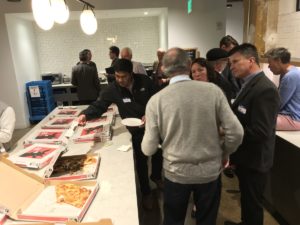 The evening got off to a great start with Unity hosting a pizza and drinks mixer in their kitchen/dining room.  WAJ President, Charlie Vogelheim then kicked off the meeting with a brief update on WAJ, and to remind members that if they hadn’t renewed their membership it was time to do that. 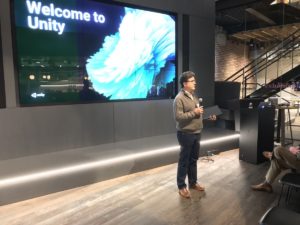 then introduced Tim McDonough, Unity’s General Manager of Industrial products who gave WAJ members an in-depth overview of what Unity’s software products do and who uses them.  Tim’s presentation is available as a (592 MB Powerpoint file) download HERE and WAJ members have permission to use it in their reporting. Companies use Unity for product design, to collaborate both locally and internationally during the design process.  The platform can also be used for autonomous simulation, adding a nearly infinite amount of scenarios to a manufacturer’s testing process. Some of us might have seen Unity in action at CES this year, where its technology was on display both at Volkswagen for training with the cool VR rear-seat games and at Infiniti in the invisible-to-visible concept. (writer’s note: CNET covered both of these but I don’t necessarily want to just put in links to my own outlet.) 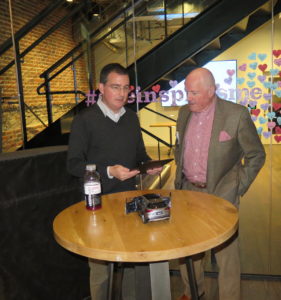 Attendees got a taste of Unity with an augmented reality car configurator set up on an iPad. By overlaying data on a scale-model replica of an Infiniti SUV, you could tap on, say,  the engine to get a larger photo and more information. 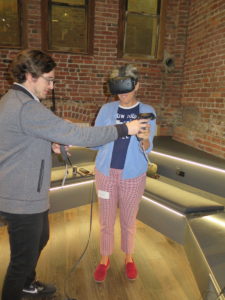 Emme Hall, WAJ VP of Events got into Virtual Reality!

Those willing to strap on a pair of ridiculous-looking goggles were treated to a virtual reality training session, working on the line at Volkswagen. This completely-immersive experience had us scanning barcodes with handsets (writier’s note: if that’s a word),picking up certain parts and depositing them in a specific location. Was it weird? Yes. But definitely cool.