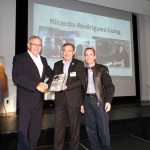 IRVINE, Calif., Oct. 30, 2013 – Ricardo Rodriguez-Long is the first Hispanic journalist in the 99 years of the organization to receive the Motorcycle Industry Council Chairman’s award, for excellence in media and outreach. Ricardo joins a select group of recipients that included in the past Mary Peters, U.S. Secretary of Transportation and U.S. Senator Amy Klobuchar.

A longtime friend to the industry, Rodriguez-Long has helped the Motorcycle Safety Foundation and the Motorcycle Industry Council by increasing their reach to the Hispanic community at large and generating Spanish-language public service announcements that encourage safe riding. Ricardo assisted the Motorcycle Industry Council with an upcoming tire guide video in Spanish, and he’s behind numerous Hispanic broadcast and online media placements featuring a wide variety of motorcycles. His 25 year career in the automotive industry with numerous awards is unparalleled. Since 2004, he has been an on-air radio host on the weekly Garage Latino at 690 AM in Southern California. The show reaches over 250,000 Hispanic’s every week and has a
companion website.

“Being a Hispanic immigrant has given me the understanding of the nuances and differences among all different ethnicities that make America great,” Rodriguez-Long writes. “I am not sure when I became the ‘vehicle’ to pass along useful information between the general market and Hispanics, but it’s a role I am very comfortable with. Credibility and access to accurate information has always been important to me.”

The MIC is headquartered in Irvine, Calif., with a government relations office in metropolitan Washington, D.C. First called the MIC in 1970, the organization has been in operation since 1914. Visit the MIC at www.mic.org.