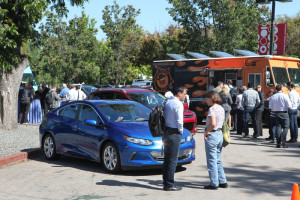 For the last six years, WAJ has produced an automotive technology conference, gathering journalists, automakers and technology experts together with car demonstrations and informative panels. Two years ago, we elected to ramp up our conference, moving to The Computer History Museum in Mountain View, a venue with a central location and first class meeting and display space.

We learned quite a bit at our successful 2016 conference and on October 5th of this year, our second Silicon Valley Reinvents the Wheel was an unqualified success- attendance was sold out. For 2015, we teamed with the Churchill Club and AutoTech Council, two important Silicon Valley organizations that helped provide top talent and guests. Two hundred technology executives registered for the daylong conference, thirteen automotive brands were represented along with Tier One suppliers. And this year, the conference received major media coverage. You can find the full schedule here.

A Few Highlights
Early arrivals spent time evaluating a wide variety of vehicles in the museum’s large front parking area that’s reserved for our event. The exhibits included fuel cell cars from Hyundai and Toyota, electric and plug-in vehicles, infotainment systems with Apple CarPlay and Android Auto and advanced hi fidelity from Alpine, Bose, Harmon and Tectonic. Look for an espresso truck to join the fun next year. 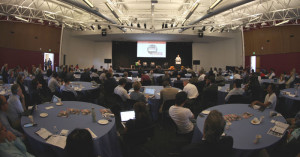 overview of trends and what the panels would offer. Then Veerender Kaul, Frost & Sullivan’s Vice President of Automotive and Transportation gave an overview of the industry. Kaul talked about timelines for alternative fuels as well as quickly emerging technologies including autonomous driving progress.

Mid morning, the AutoTec Council’s Liz Kerton introduced five startup entrepreneurs who each took the stage to pitch their technology. They were all interesting, but the most entertaining was the facial recognition technology from EYERIS. Its CEO J. R. Alaoui gave a real-time demonstration of his software that was convincing enough to solicit an inquiry from a major automaker’s lab.

The Infotainment and Connectivity panel followed with KIA’s Harry Bezih, GM’s Dan Kinney and Jaguar/Land Rover’s Matt Jones in an interesting dialogue moderated by Charlie Vogelheim. With both Apple and Google bringing mobile connectivity into car interiors, OEM systems and competition for driver attention, there’s a lot of growing interest in this space.

Automotive sound technology is more than hi fi these days. It also includes sonic enhancements for performance cars and mitigating external noise. WAJ’s Brian Douglas moderated a panel of experts from Alpine, Bose, Harmon and newcomer Tectonic, a company with new speaker technology found in Bentley models. Alpine’s Jim Walter brought a video demonstrating how the company built an entirely weatherproof hi fi system for the Jeep Wrangler and Tectonic punched up impressive sound from its speakers on either end of the stage. Following the panel, attendees were able to check out a great gathering of vehicles and gourmet food trucks during the lunch break. 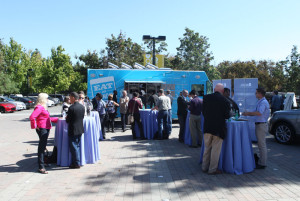 After lunch, the program resumed with Michael Coates moderating a Zero Emissions panel with Dr. Alberto Ayala, Deputy Director of the State of California Air Resources Board and Dr. Morton Grosser, a Stanford and MIT schooled physicist and Silicon Valley venture capitalist. Ayala asserted that California’s aggressive carbon elimination program was attainable with new technology. Grosser spoke of the efficiency yet to be attained from petroleum and energy sources with wide infrastructure. 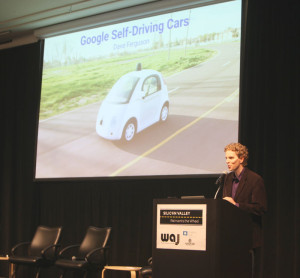 delivered an informative and entertaining presentation of his company’s autonomous driving progress. His highlight was the story of a Google vehicle encountering an elderly woman in a wheelchair chasing a goose back and forth across a city street with a broom. The vehicle’s camera footage was omitted for privacy, but the computers followed the action in front of the stopped research vehicle. You can’t make this up, let alone program for this occurrence.

That now famous question of whether the fully autonomous vehicle will decide to either save the occupant or the school children in a potential head-on collision and who is responsible for that decision was one of the ethics issues tackled by Stanford and Santa Clara professors. Since computer programmers can’t possibly code for every possibility, remember the broom-wielding goose chaser, some thorny issues were part of the discussion. Brian Cooley led a thoughtful discussion of Artificial Intelligence Ethics with a panel weighing in from an engineering, philosophical and legal viewpoint.

Attorney James Pooley, the former Deputy Director General of the World Intellectual Property Organization, gave a compelling update on Cybersecurity. Pooley also ventured his opinion on VW’s scandal and how some corporate cultures can isolate management from problems that people outside the glass walls easily discover.

NVIDIA’s automotive director Danny Shapiro plunged into deep learning, an area of expansion for the visual computing firm based on its powerful processors. With new vehicles consuming more computing power than any other sector, it’s created a vibrant tier-one supplier structure right here in Silicon Valley. 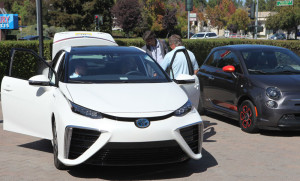 After a network reception, Eric Larsen provided the keynote address with WAJ’s Brian 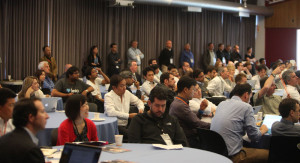 Douglas. Larsen shed some light on demographic trends that are counter to the notion that America’s population will cluster around transportation hubs and eschew car ownership. That’s more an aspiration of civic planners than the reality on the ground and perhaps good news for those of us who cherish personal freedom.