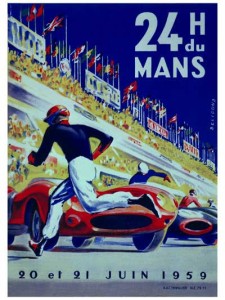 The year 2013 is the centennial for Aston Martin, one of the greatest marques in the history of the automobile. To help celebrate this occasion, WAJ was honored to have Doreen Green available to speak to us on Saturday, February 16, 2013 during lunch at YiPing Restaurant, 2416 San Ramon Valley Blvd., San Ramon, CA.

Doreen Green, then Doreen Sherwood, joined David Brown-Aston Martin in 1949 as a secretary. She would work for the drawing office crew, Professor Eberan von Eberhorst (of Auto-Union fame) who was to design the DB3, and racing team manager John Wyer when he joined Aston a short time later. 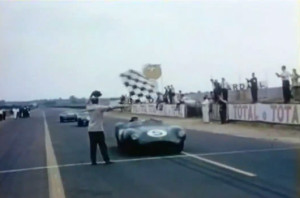 Aston was a family affair, as Doreen’s two brother’s also worked at Aston Martin; Roger in the drawing office – whose claim to fame at the time was inserting “David Brown” onto the Aston Martin badge; and Brian, who started out in the sheet metal shop and became a panel beater.

At one point she had her own office, which was a big deal as the other girls didn’t. Over her seven-plus years there she became friends with many now famous people; her favorite being Peter Collins.

In the spring of ’54 a tall, lanky young man walked into her office wanting to see JW. He said he was here from America, and “I want to go racing.” Carroll Shelby had driven DB3S/3 at Sebring and was now in the UK to race in some local events. Doreen told him, “You just can’t show up, they have rules, so I’ll get your entry forms, we’ll see about getting you some start money”… and then she went about contacting their suppliers for some tires, brake parts and motor oil.

Doreen was rarely let out of her office, John Wyer preferring it that way. While he was away one day, Roy Parnell (and Peter), who was taking a DB3S to test at a local airfield, took Doreen along to keep notes and times. At one point she was in the passenger’s seat as they did laps. After a time Roy stopped the car and told Doreen to get into the driver’s seat. Giving her tips on holding the wheel at 3 & 9 o’clock positions, how to left foot brake, change gears and such. Before the day was out Doreen was doing better than a 100 mph down the straights in a DB3S! Even at 81+ years old (February 2013), Doreen still drives her supercharged Jaguar XJ8R the same way.

Doreen met her late husband Dickie Green in Feltham in 1952. Dickie had joined Wade Engineering in 1948. During his time at Wade, Dickie was at Aston often while they were fitting a supercharger to a DB3. He was there so much that John Wyer offered him a job. Thus Dickie joined Aston Martin in 1952 and became part of the racing department. His responsibilities included building, preparing and pitting for the team cars for all the significant races like Silverstone, Goodwood, LeMans, Monza, Mille Miglia and the Isle of Man.

For the 1955 season Dickie joined MG Competition Dept at BMC under Marcus Chambers, it was here he met Ken Miles, who’d come to drive the EX182 at LeMans that year. After the Monte Carlo Rally, on February 5, 1956, Dickie emigrated to California (Doreen followed in April). In order to enter the USA one would need a sponsor; enter one Ken Miles. The wealthy American was assembling a sports car racing team at that time, and Dickie was coming to California to be part of that team. When he arrived Ken met him at Customs, and shortly thereafter was told that the team was no more. With only $27 in his pocket, Ken left Dickie at a local Los Angeles motel and told him to go see this joker Tony in the morning. The next day Dickie walked a couple blocks to meet Tony Paravono. During the interview, Tony being Tony, he was being hardnosed about the job. Suddenly the phone rang and Dickie became part of the conversation. When Tony got off the phone, Dickie asked Tony,“Who was on the phone, if you don’t mind me asking?” “It was that goddamn Shelby!” Tony said. Thus Dickie was employed by Paravono taking care of his Ferraris, and in a very short time was the Shop Foreman.

In April Doreen came to America, and she too would need a sponsor, Tony Paravono was that sponsor!  Like any new resident, Dickie had to get a California drivers license. You’d never believe it, but Dickie went in Tony’s 250 TDF Ferrari! (This same car can be seen a few pages into this section, http://www.offroadexperience.com/wcb/aminfo.htm). One day a young kid in a leather jacket riding a motorcycle comes into the shop and chats up Dickie… this was a young Dan Gurney. Dickie convinced Tony to test Dan at Willow Springs in the “coupe”, meaning the TDF Ferrari. During the test all was going well until Dan went off the road and blew a hole in the fuel tank. Tony went mad! As Doreen tells it, he was standing next to her, he got very vocal and nasty… “Get that goddamn kid out of my sight!” (when I saw Dan at Willow Spring in 1997 – I think – I was there racing my Ducatis and he’d come to watch… we talked about that test all those years before. Dan said, “It was the only job I was ever lost.”

During this time Dickie & Doreen had a wonderful time! They bought an XK140XMC from Joe Lubin, traveled about California to the races and met some of the (now great) drivers of that time. Carroll and Ken they already knew, now enter Dan Gurney, Skip Hudson, Phil Hill, Bobby Drake, Masten Gregory, Lance Reventlow, Steve McQueen, and mums favorite… Ritchie Ginther. Ritchie use to come to lunch every Sunday (when not racing) at Dickie & Doreen’s where he’d get Doreen to make tuna casserole!

Richard would again join Aston Martin in 1958, this time as Resident Engineer for David Brown-Aston Martin, based in San Leandro, CA. The Green’s involvement with Aston continued for many years thereafter.