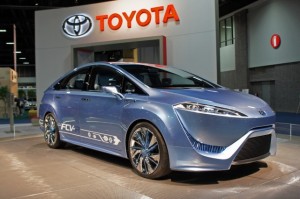 For more than a decade, fuel cell vehicles have been promoted as a “zero emission” technology that delivers the benefit of electric power without the long recharging time. Despite the promise, only a handful of fuel cell vehicles exist in daily use. And those few vehicles are in service in Southern California where refilling infrastructure exists.

At this year’s Consumer Electronics Show (CES) in Las Vegas, Toyota’s Bob Carter announced that Toyota will launch an affordable fuel cell vehicle in 2015 that will accomplish for this technology what Prius did for hybrids. Carter further volunteered that Toyota would help develop the critical hydrogen refueling structure.

Propelling fuel cells into the mainstream a big ambition for any company, even the world’s largest automaker. But if Toyota can pull it off, the brand will leapfrog its competition and further cement its title as technology leader.

How will Toyota pull this off? Will its fuel cell sedan perform well? Have adequate range between refills? , Toyota’s National Manager of Advanced Technologies will answer these and other questions in a newsworthy presentation at our February WAJ meeting.